Vitiligo is a pigmentation disorder in which the cells that make pigment in the skin (melanocytes) are disintegrated. Accordingly, white patches arise on the skin in various areas of the body. Similar patches may also be present on the mucus membranes and the retina. The hair that grows on parts affected by vitiligo at times turns white. 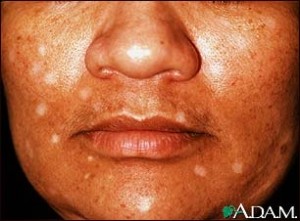 The cause of vitiligo is unknown, but there is enduring evidence that people with vitiligo inherit a group of three genes that make them predisposed to depigmentation.

About 65 million people in the world have vitiligo. In the US, about 2 million people suffer from the disorder. It affects both sexes and all races evenly; still, it is more conspicuous in people with darker skin.

Diagnosis of vitiligo is established through physical exam, medical history, and laboratory tests.

The principal aim in treating vitiligo is to make the patches disappear or less obvious. Treatment for vitiligo takes a long time; for the most part, it can carry on for 6 to 18 months. Every patient reacts in a different manner to treatment, and a specific remedy may not work for each one.

Numerous medical treatments, most of which are used topically, can lessen the appearance of vitiligo. However, more and more people are also resorting to alternative remedies which are said to be proven effective in treating the disorder. Here are some of them:

Phototherapy can help in the re-pigmentation of the skin caused by vitiligo. These days, it is regarded as the best treatment for people affected with vitiligo in more than 20% of their bodies. The process is gradual – acting on the outer edges of each patch first, and then going inward – hence, routine phototherapy sessions can go on for months. To save yourself from exhausting and expensive trips to your light therapy treatments, you can purchase your own vitiligo UVB lamps. These UVB phototherapy lamps are safe, affordable, and you can bring and use them anywhere. They have been carefully tested and they have been proven to be effective in treating vitiligo. Phototherapy, in most cases, is well-tolerated by adults and children.

A few patients with vitiligo cover patches with makeup, self-tanning lotions, or stains. These cosmetic products can be specifically effective for those whose vitiligo is confined to bare parts of the body. Countless cosmetic companies present dyes or makeup that you may find convenient in covering up patches. Self-tanning lotions may be better than makeup though, since the color can last for several days and it will not come off when bathing.

Ginkgo biloba is one particular herb that has been proven to help the body in fighting bacteria and fungi, as well as different skin problems, such as vitiligo. For those with slow-spreading vitiligo, taking 40 milligrams of ginkgo three times a day may bring to a halt the spread of vitiligo. In one placebo-controlled experiment, ginkgo brought about re-pigmentation. Nevertheless, this remedy is not well studied, so it is still best to check with your doctor before taking this alternative treatment.

3 Replies to “Alternative Treatment for Vitiligo”